Once much of the level’s designs were finalized I then proceeded to build a whitebox of the level in the CryEngine 3 Mod SDK. The level was continuously revised to make its design layout appear like a logical and believable environment. 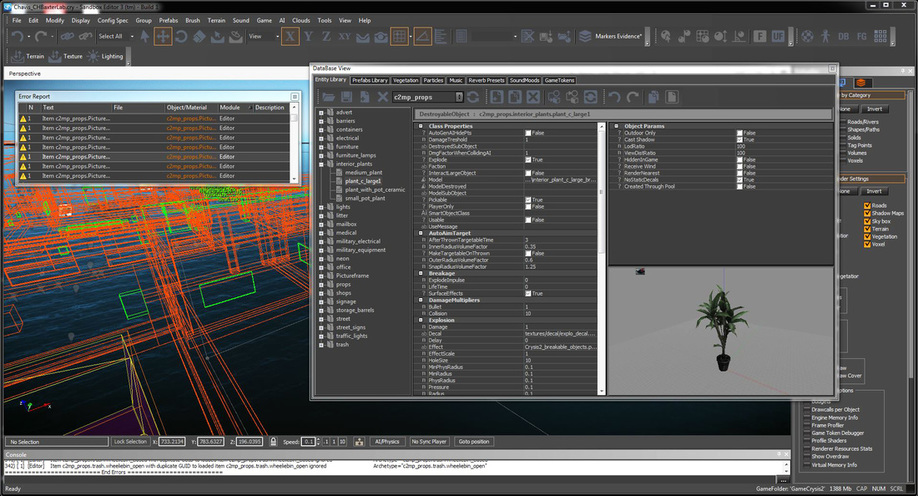 Working in the CryEngine 3 editor

Since this thesis focused heavily on using environmental clues to deliver a narrative, the level’s visual aesthetics became a high priority. Players who were required to examine the environment closely could easily discover game objects that appeared out of place or weird. This could lead to players being unintentionally distracted from their investigation and ruin the effectiveness of delivering the narrative. 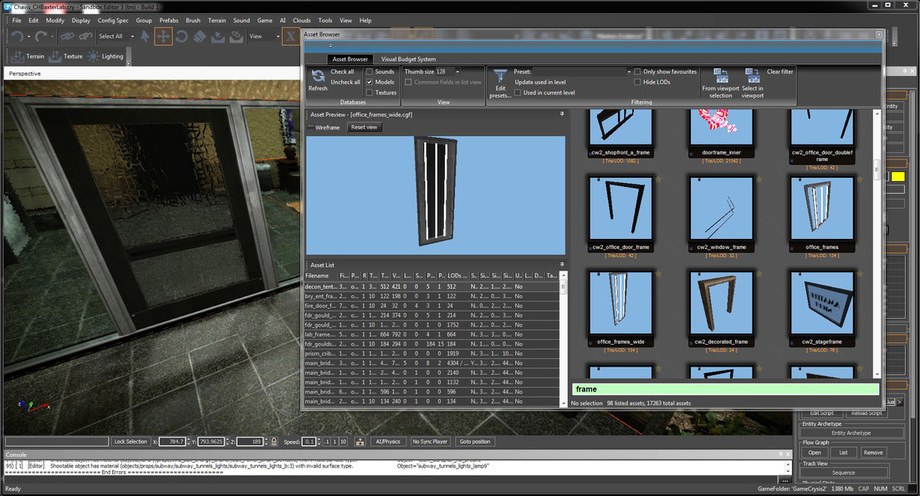 Asset Browser window in the CryEngine 3 editor
A major goal during development was to make the environment appear as visually realistic as possible. This meant that every object, particle, decal and texture was placed with careful consideration for how it could affect a player’s interpretation.

Any game object that was a potential distraction in the environment for players was labeled as “anomalous.” During each level iteration there was a process of reducing, moving or eliminating anomalous game objects. All anomalous objects fell into one of three categories and had to be handled differently based on their category. An anomalous object could be labeled as a Numeric Anomaly, Visual Anomaly or a Story Anomaly.

The bottles in the lab areas were numerous enough to distract players
Numeric Anomaly: Numeric Anomalies were objects that appeared weird because their numbers were too few or too vast in the environment. Having too many chemical bottles in the level led one player to believe that the murders were caused by a chemical or biological attack.  To resolve this the number of bottles was simply reduced.

The bright pink texture immediately drew player's attention to the tissue box
Visual Anomaly: Visual Anomalies were any objects whose visual appearance could easily draw a player’s attention away from other parts of the environment. Several players easily noticed tissue boxes placed throughout the level due to its bright pink and white texture. To resolve visual anomalies the objects were either removed entirely or greatly reduced in the environment.

The body bags in the main lab gave players the impression of a zombie outbreak
Story Anomaly: Story Anomalies were objects that gave players the wrong interpretation of the level’s narrative. Having a shelf full of body bags made several players believe that a zombie outbreak had caused the murders. Story Anomalies were resolved with either moving the objects around to provide a different narrative clue or completely eliminating them.

As an example, a chair would be sitting upright while the “Pristine” layer was visible but a duplicate of the chair would appear knocked over when the “Evidence” layer was visible. Other evidence objects, like dead bodies, bullet casings and bloodstains, would only appear when the “Evidence” layer was visible since they didn’t have duplicate versions on the “Pristine” layer.
This process of developing the level in an unaltered state first and then modifying it into its altered state helped create a believable murder scene around a complex narrative. Without the unaltered state, the level most likely would have had many continuity errors conflicting with the written narrative.

In order to show a narrative mainly through the environment, the placement and orientation of objects has to be carefully considered. Using certain kinds of objects or placing objects in a certain way can easily alter the message it is sending to players. A scene where objects are knocked over or destroyed due to a struggle between two people would have to appear different from a scene of brazen vandalism. And these two scenes need to appear distinct from a scene where someone carelessly rummages through other people’s belongings.
The main way players were able to distinguish certain scenes from other similar scenes was by the details in the scenes and how they logically melded together. For players each detail in a scene acted as individual clues to what happened in that scene.
Many players also determined that the broken display case was destroyed out of a deliberate act of possible anger. They reached this conclusion because the display case was the only object destroyed near the dead executives, like it was specifically targeted. With players using such details to gather the level’s narrative, every evidence scene was carefully constructed with these kinds of details in mind.
Back to Top