The main feature of my level was giving players environmental objects to use as hazards against enemies. The hazards had to be objects that would appear in a factory and were conveniently placed over emergence holes to seal them quickly.

In the game Gears of War the enemy, known as locusts, can emerge from anywhere underground via emergence hole. A standard gameplay mechanic is for the player to close or seal an emergence hole quickly by throwing a grenade in it. Emergence holes also close on their own if all of the spawning enemies from that hole were killed. 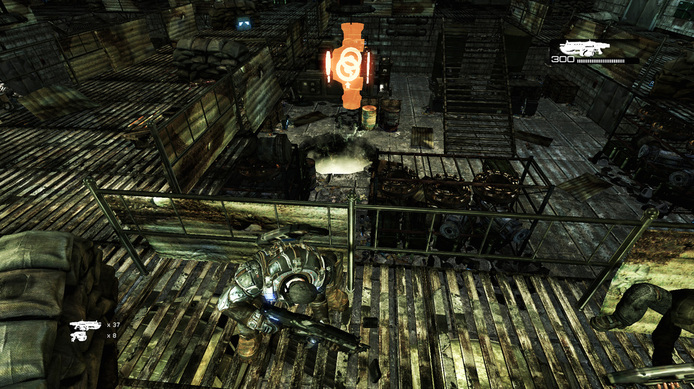 Hazards are conveniently placed over emergence holes to quickly seal them
The two hazards in Stranded Factory were designed as convenient alternative to throwing a grenade in an emergence hole. A player could shoot a hazard object and then watch as the hazard fell in and sealed the emergence hole for them. This created new tactical options and added a new form of interactive gameplay to a Gears of War level.

I wanted to minimize the ways a player could improperly use the hazards. The design goals for these hazards were as followed:
Back to Top