This method of storytelling is viewed as insufficient at clearly delivering a narrative that players can understand. It is currently believed that at some point during the game, the story needs to be explained explicitly. After collecting enough research I started designing a test level that would either prove or disprove the effectiveness of environmental narration.

The first part of designing the test level involved creating a backstory for the crime scene that was complex enough. The more complex the murder mystery, the better range I had to test how players interpreted the environmental clues.
C. H. Baxter Lab Backstory:

A soldier named Tim Hopper regularly goes to C. H. Baxter Laboratory for medical treatment and checkups. Only when he starts having weird muscle spasms and headaches does he suspect something is wrong. Tim discovers that the scientist at Baxter Lab have experimented on making him a genetically enhanced “super soldier.” Realizing that he was deceived, Tim then plans a deadly revenge scheme to kill all of those responsible for the human experimentation. When Tim confronts one of the scientists in his home, the scientist offers to help him gain access to the Baxter Lab if he spares his life and Tim agrees.

The next day when the traitorous scientist comes to work, he lets Tim in through the front security doors with his badge. Once Tim sneaks into the executive office area through a ventilation shaft, he captures and tortures the lab executives for information on their human experiments. As he begins to learn about their “super soldier” project he gets angry and kills the executives in an execution style to make examples of them. Tim then goes to the main lab and finds that the scientists experimented on and killed a friend and fellow soldier from his unit. This sends him into a grief filled rage which leads to him murdering anyone else who is in the Baxter Lab. After his grisly massacre he escapes the Baxter Lab through a fire exit in the main lab area.

Next I drew simple layouts of the level to determine level size, room size, path options and architectural design. From the written backstory I created a walk-through of the killer’s path through the level. (See details on Development Notes) 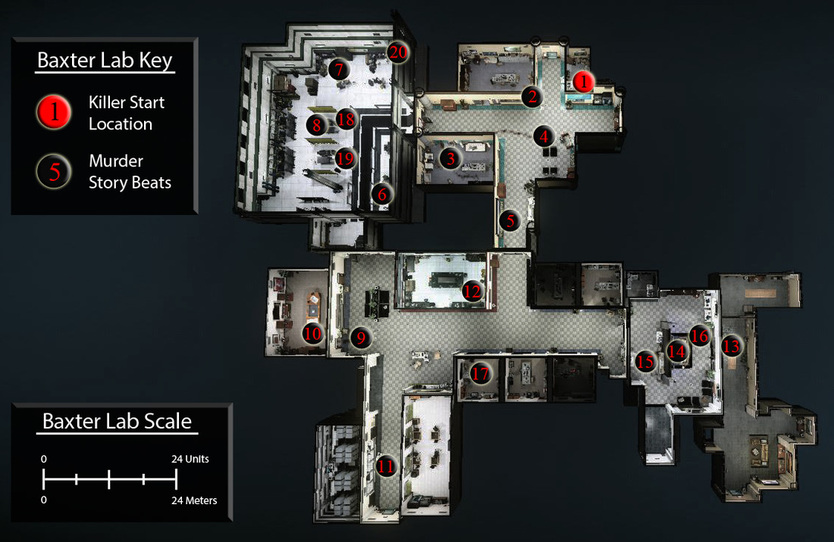